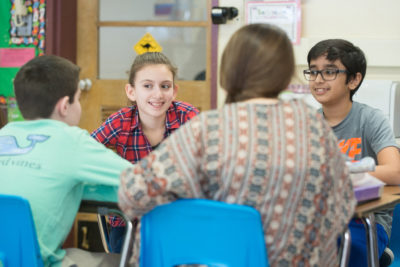 Helping students build relationships with each other is a key to creating an optimal learning environment. Stronger bonds mean students will be less likely to be unkind, to exclude others, to call each other names, or to stand by in the face of mean behavior toward a classmate. The safer students feel, the more learning challenges they will embrace and the more collaborative they will be.

One way to build positive relationships in a classroom is by giving students opportunities to get to know each other’s talents, interests, and stories. Teachers often emphasize this aspect of community building at the beginning of the school year, but it’s just as important to maintain these relationships throughout the school year. After all, people change as they grow and learn. How different are your students now compared to who they were in September? And how well do your students know each other now that they’ve been together for almost a full school year?

For middle school educators, planning Responsive Advisory Meetings with the purpose of building student-to-student affiliation can help students reconnect with each other.  Earlier in the school year, students are in search of meaningful relationships and have a strong need to be with their friends. Throughout the year, reminding students to greet each other by name each day will not only help to build a positive learning community but also address students’ need to get to know others and be known by others. By this point in the school year, be mindful of the beginning of cliques, and remember to regularly mix students up in different pairings and groupings.

In addition, later in the school year it’s important to pay attention to shifting dynamics within groups and provide guidance as needed. For example, sixth grade student Henry was having an increasingly difficult time connecting with other students. He struggled with physical self-control, and other students were having trouble interacting with him in meaningful ways and were often annoyed and frustrated with him. Joe Tilley, Henry’s Advisory teacher and a Responsive Classroom professional development designer, realized that the relationship between Henry and the other students had gradually created a dynamic in the sixth grade classes that did not support their learning community. He decided to plan some Responsive Advisory Meetings around the purpose of building student-to-student affiliation to help all the students reconnect with each other.

Joe planned structured and purposeful ways for the students in his Advisory to get to know each other on a deeper level. Through activities such as Four Corners and Take a Side, Henry’s peers learned things about him they hadn’t known:  that he was good at math, played the clarinet, and had a multicultural family. This new knowledge helped them develop more empathy and appreciation for Henry.  In turn, Henry was able to interact with his peers in controlled, structured ways, helping him get to know them better while feeling a sense of significance, belonging, and fun.

Here are a few activity ideas to try as part of your Responsive Advisory Meeting or Morning Meeting that will support students getting to know each other better:

It’s not too late in the school year for students to get to know each other better. These relationships are where students learn and practice social skills so that they can collaborate on academic projects, assert themselves respectfully, and have empathy for each other. Middle school students are exploring new aspects of their identities and their emotions are running high. Learning about each other helps them to strengthen their relationships as they navigate the ups and downs of being a young adolescent.

8 Replies to “It’s Time to Reconnect”

What Are Your Hopes?
Stop Bullying Before It Starts
Helping Students Give Effective Compliments
Teaching Skillful Communication