How Logical Consequences Are Different From Punishment

A student doodles during class instead of completing their assignment. Classmates shove each other as they get in line for recess. Between periods, a group of students runs down the hall to get to class. A student talks over a teacher’s instructions. Do any, or perhaps all, of these situations sound familiar to you? Most teachers have run into at least one of these issues before, and so are familiar with the sense of frustration and even anger that can accompany this kind of misbehavior. In the moment, an educator has two options for a response:

What Are Logical Consequences?

Logical consequences are an effective way to respond to misbehavior in the moment. For that reason, they are an important element of the Responsive Classroom approach to discipline. Unlike punishment, logical consequences are respectful of the child, realistic for the child (and teacher) to accomplish, and related in a way that allows the child to take responsibility for their actions and learn socially responsible behaviors.

The three types of logical consequences used in the Responsive Classroom approach are:

How Do Logical Consequences Differ From Punishment?

It can sometimes be tricky to know if a response to misbehavior is a punishment or a logical consequence. Here are a few things to keep in mind: 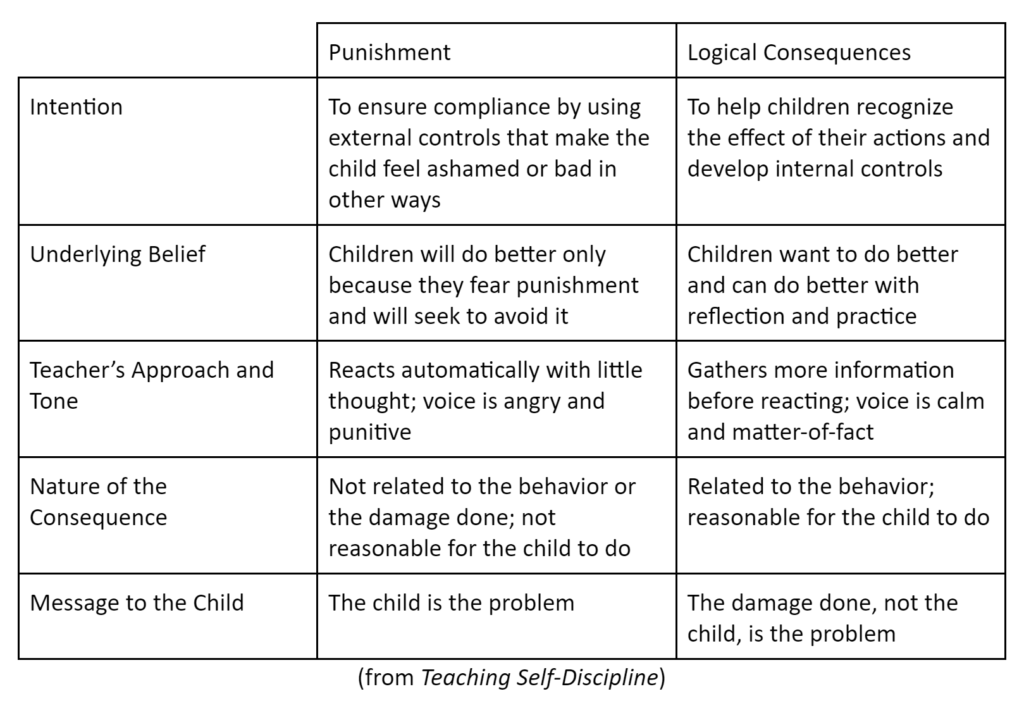 You can find out more about logical consequences in Teaching Self-Discipline and Seeing the Good in Students.

Jane Cofie is the director of curriculum and instruction for Center for Responsive Schools and the author of the book Strengthening the Parent-Teacher Partnership.

Five Steps for Responding to Midyear Misbehavior
How To Use Positive Time-Out to Teach Students How to Calm Down and Regain Self-Control
Ways To Address Common Behavior Challenges That Pop Up Midyear
How Do You Know It Is Happening? Six Clues That May Indicate Cyberbullying