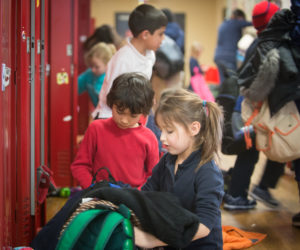 In many classrooms, it’s during transition times that things get a little chaotic, possibly resulting in behavior problems that frustrate in the moment and spill over into the rest of the day. Many teachers resign themselves to the chaos. For years I did that myself. Then one year, I decided to tackle transition problems head on. Here’s how I worked with fourth grade students to make transitions calm, orderly, efficient—and even fun!

First, I observed a few transitions, trying to see what exactly was making them so rough. One day, for example, the class was working at tables on a group project. I announced that it was cleanup time and that next we’d gather on the rug. Then, instead of intervening as the mayhem began, I simply watched.

I saw many things I hadn’t noticed before. Carlos immediately dropped what he was doing and started cleaning up. Abdullah took a while getting to a good stopping place. Frankie finished first because he didn’t do any cleanup at all—Ana did it for him! Gina, anxious to complete her job of putting away her group’s journals, scolded Brenton, “Come on, we have to get ready!” while he slowly wrote his last sentence. Those waiting got bored and antsy. Those still finishing got frustrated and angry. No wonder everyone felt stressed when we were finally together on the rug!

I noticed some positive things, too. Most children knew how to do many transition tasks, such as putting away materials and moving safely around the classroom. These were things I’d modeled and we’d practiced together since the fall. The missing skill was pacing—deciding how quickly to do each thing and in what order. Most of the children clearly needed help developing this skill. I needed to model and then give the children opportunities to practice pacing, just as I would when teaching any new skill.

Here’s how I taught the students about pacing during transitions.

First, I reviewed what was supposed to happen at cleanup time. This helped ensure that we all started with the same ideas about how cleanup should look, sound, and feel in our classroom.

Next, I started giving advance warnings such as “You have five minutes before cleanup.” This gave the children time to shift gears mentally and to plan how they would manage the transition.

Teaching what to do after the warning

My observations told me I couldn’t assume students knew how to best use the time between the warning and the beginning of cleanup. So I set up a table as if I were in the middle of a project and role-played what I might do after hearing I had five minutes before cleanup. I thought out loud about my stopping place, how I’d organize my cleanup, and how long I estimated things would take. I asked the children to help me problem solve. Then I had volunteers role-play how they would handle the same situation, showing there could be more than one approach.

For a while, we practiced in “real life” situations by stopping after the five-minute warning and asking a few students to share their wrapping-up plans. Then we’d proceed, and they’d try out their plans. After cleanup, they’d report on what worked, what didn’t, and what they might do differently next time.

Giving a set amount of time for the actual cleanup

To help the children pace themselves during cleanup itself, I introduced a new routine. When I’d sung “Black Socks,” a class favorite we’d learned during Morning Meeting, an agreed-upon number of times, everyone was to be cleaned up and on the rug. Early finishers would sit and join me in the singing. I started by singing the song three times—the amount of time the slowest child needed. Later, as the class’s skills developed, I sang it fewer times.

Putting it all together

Finally, when I judged that the children were ready to pace themselves completely independently, I simply gave the five-minute warning and let them get ready on their own. Five minutes later, I’d begin singing while observing the children. Some children could clean up by the time I’d finished the first verse; some, by the end of the second verse; and some needed all three verses, which was fine. Because the transition time was defined as “until the singing ends,” when the last child popped into place in the circle and everyone sang the last chorus of “Not yet! Not Yet! Not yet!” together, we all felt proud and successful.

Instead of singing, many teachers use a countdown to structure their transitions. In my class, occasionally switching to a countdown by fives or sevens gave us some variety—along with a chance to practice our times tables.

As with any other classroom skill, children don’t necessarily come to school knowing how to do transitions—we must teach them. And teaching transitions is like teaching any other activity or task. First we observe to identify the skills students lack. Next, we name expectations, demonstrate appropriate behaviors, and let students practice. Then, if we continue to observe and support children, we can expect transitions to meet the same high standards as any other part of the school day.

After twenty-three years as a teacher, administrator, test coordinator, and Responsive Classroom trainer in Springfield, Massachusetts, public schools, Tina Valentine joined the staff of NEFC as a senior consulting teacher in 2006.

Jake's Social Stories
Time to Change the Routine?
How To Use Positive Time-Out to Teach Students How to Calm Down and Regain Self-Control
Strategies for Getting Students Back on Track