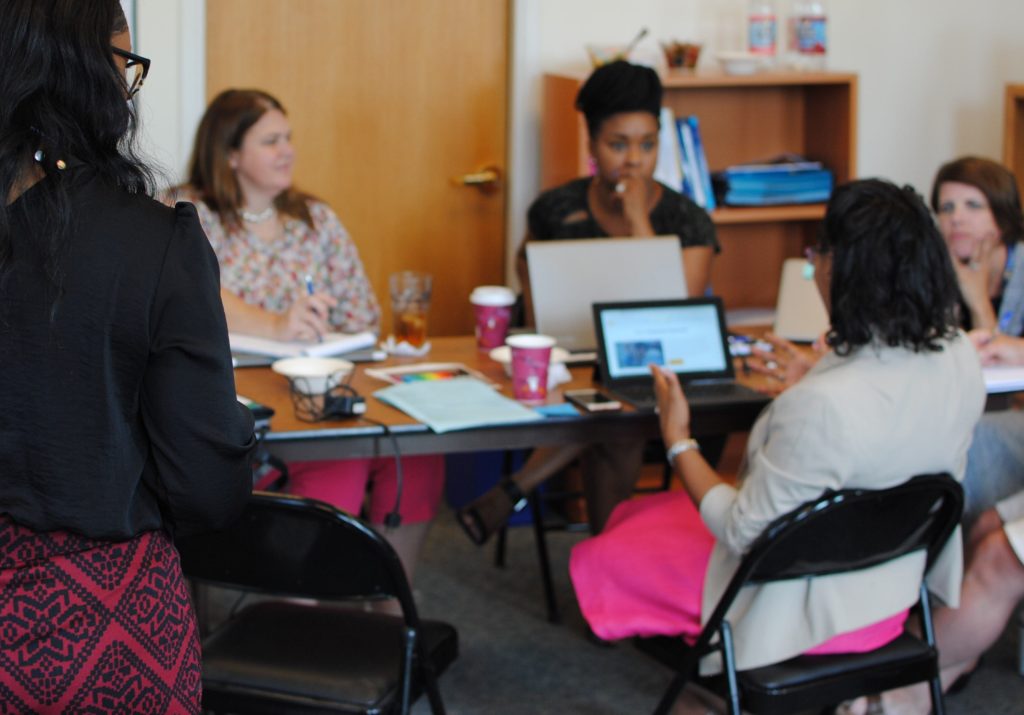 Early in that first week, I waited anxiously as my teachers joined me for our first day of two weeks of professional development. I greeted each one and watched as they found seats in the circle of chairs. The group struggled at first to make small talk until we had all gathered. I rang a chime and welcomed them, explaining that we were going to take time to get to know each other. I then led them through their first Morning Meeting.

I started that first gathering of a group of adults who did not know each other in the same way I had started each day in the classroom for so many years. After ten years of teaching in grades kindergarten to fourth, Morning Meeting had become a large part of what I valued in my classroom. In fact, it’s what had brought me to Responsive Classroom. Someone shared The Morning Meeting Book with me and it was the missing piece I needed for my teaching.

So I started that first day with the teaching staff by leading them in a Morning Meeting because, while I was still trying on my new role as principal, I knew how to be a teacher. And just like in the classroom, leading the group together in Morning Meeting did not disappoint. As we ended our first week of professional development, I looked around at the community that was going to embark on this journey with me. We laughed and we celebrated. But as the teachers left and made their way through the hallways and conversations carried lightheartedly on, I realized something was missing—some people were left out.

While the teachers were getting to know each other, the school secretary, parent coordinator, custodian, and lunchroom worker were on the fringes. While we were in professional development, they were off doing other business to help the school get up and running. I decided to invite them to join us and they gladly accepted. Who wouldn’t want to be a part of the camaraderie and the community we were building?

During the second week it was amazing to see how our adult community strengthened, and those efforts paid off for the school as much as they paid off in the classroom. It was this community—and the Responsive Classroom guiding principle that how we work together as adults is as important as our individual contribution—that sustained us that first challenging year. We were figuring out not only how we were going to function as a staff, but how we were going to engage students and families. There was a lot of laughter and sharing of successes but also tears and hard conversations.

At the close of the professional development weeks, we decided to continue meeting as a team—all adults in the school—every Friday afternoon. Instead of yearning to go home at the end of a long week, the staff would show up ready to work further to help realize the vision of the school. We always started those Friday gatherings with a Morning Meeting, then moved on to topics such as revisiting rules, discussing ways to use Interactive Modeling in common areas, and using the class meeting format to discuss issues like recess, the lunchroom, transitions, and discipline. We examined our language constantly and were conscious of the words we used, both with adults and with students. And when we ended that first year with a professional development day, we sat together as a community, reflecting on how far we had come, sharing our celebrations, and envisioning where we wanted to go.

I had the privilege of sharing in the growth of this school community for five years. All along the way, Responsive Classroom practices continued to be the compass for who we wanted to be. Over the years it was rewarding to see the school make gains in academics and as a community. A resounding theme when people walked through the front door was “This place just feels good.” Careful attention to the same practices used to build strong and joyful classrooms also sustained us as a school. Whether it was quick emails to staff with reinforcing language, honoring and getting to know teachers and respecting where they were developmentally in the profession, or naming problems that needed to be solved and working together to solve them, the same heart and essence of the Responsive Classroom approach that successfully guided me in the classroom proved just as essential as the leader of the school.

Since leaving the role of a principal, my work has afforded me the opportunity to visit many schools, both nationally and internationally, and see the Responsive Classroom approach in action. The common theme for schools where the approach really transforms the narrative is that these schools embrace the approach fully, including not only teachers but the entire adult community—thus making it part of every fiber of the school.

Karen Poplawski is a Director of Programs for Center for Responsive Schools (CRS). Prior to becoming a director at CRS, Karen was a Responsive Classroom Curriculum & Instructional Designer, and Consulting Teacher, working with educators worldwide to transform their school communities. Before joining the staff at CRS, she spent ten years as a classroom teacher, and seven years as a principal—utilizing Responsive Classroom techniques and practices in the classroom and in the two schools for which she was the founding principal.