When principal Susan Mele arrived four years ago at Stewartsville Elementary School, the discipline was in chaos. More time was being spent on discipline than instruction; teachers were exhausted from dealing with inappropriate behaviors that negatively impacted instruction; students were rude to each other and didn’t seem to care. Susan recalls,

“On most days, I had no time for anything but discipline. I was literally wrapped up with disciplining students from the moment the buses arrived at 7:30 a.m. until 5:00 p.m. when I would finish my last phone call to parents.”

Something big needed to change

Midway through the first year, she challenged the leadership team, stating,

“We can’t go on like this. This isn’t education. We’re just trying to hold down the fort here and it isn’t working.”

There were nods of agreement around the room. Several people who were familiar with the Responsive Classroom approach suggested that the school consider adopting it as a means to change the school climate.

“I knew if this was going to work, we needed the full support of the staff. The leadership team decided to introduce the idea to the faculty and explain that to make it work we all had to be on-board with the concept of Responsive Classroom. I just knew that it was not going to work if we were only willing to go part way.”

In the first year of implementation, Susan carved out 20 minutes in the schedule for Morning Meeting and established the expectation that all teachers would conduct Morning Meetings daily. She also purchased resource books for every teacher, such as The Morning Meeting Book, The First Six Weeks of School, and Doing Math in Morning Meeting, along with a chime to use as a signal for getting students’ attention.

In addition, she devoted time in staff meetings to modeling Morning Meeting components and sharing ideas for activities that connected to the curriculum. Finally, she introduced the approach to parents and built their support through regular communications emphasizing the importance of creating a more positive climate for learning.

A noticeable change in the first few months

Within six to eight weeks of starting the new school year, teachers began to notice a change. Students seemed more excited about coming to school; parents began reporting that students were upset if they didn’t get to school on time because they would miss Morning Meeting; students were starting to greet one another and teachers by name; and older students were seen helping younger students on the bus and in the hallways. Recalls Susan,

“It just completely changed the atmosphere of the school. It was simply amazing to watch. We were transformed into a kinder, gentler community of learners.”

Discipline referrals dropped significantly that first year as did bus referrals. Daily attendance was up by a point and a half and has stayed there since.

The next summer, more staff attended the week-long training, including classroom teachers, special area teachers, and paraprofessionals. Throughout the year, the staff committed to studying The Power of Our Words: Teacher Language That Helps Students Learn and to creating whole-school rules.

After the first day of school in the second year, the staff was in awe about how smoothly the year opened, and it continued to get better from there. There was more time available for instruction and teachers were more satisfied with their jobs. In Susan’s words,

“It completely changed who we were as a school. Students and teachers knew each other and were motivated to work things out when there was a problem. There was so much more time for learning and students were more available for the learning. And now when I get a discipline referral it’s an anomaly. We’ve come a long way in just a few years.”

“I constantly tell other school leaders, ‘If you want the kind of impact we’ve had at Stewartsville, give teachers the support they need to implement the program well and keep the momentum going year after year. It takes strong commitment from the principal and the entire staff to make it work, but it’s worth it!'” 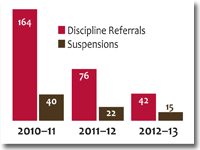 Look at the Data:

About the School: Located in Goodview, VA; Grades Pre-K–5; 430 students; in 3rd year of implementation

Read more stories like this one! This article was adapted from “The Responsive Classroom Approach in Action: Three Success Stories,” a booklet you can download in PDF format.