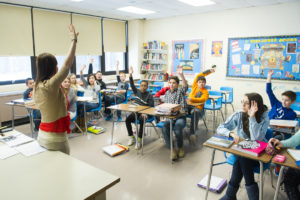 School rules. The mere mention of these words can elicit heavy sighs and moans from children and adults alike. Rules order us around. Rules constrict us. “No running, no hitting, no pushing, no cutting in line, don’t interrupt . . .” As one young child put it, “You want to do something and the teacher just comes along and says you can’t!”

But it doesn’t have to be this way. In Rules in School, four experienced teachers—Kathryn Brady, Mary Beth Forton, Deborah Porter, and Chip Wood—describe a positive approach to helping children create and live by classroom rules.

Early in the year, students and their teacher articulate hopes and dreams for the school year. They then generate rules that will help all class members realize their hopes and dreams.

The resulting classroom rules take on a radically different feel for students: These are our rules. We created them. They’ll help us achieve our goals.

Once the rules are created, teachers help students practice the rules. And when rules are broken, teachers respond with nonpunitive logical consequences.

The importance of practice

Just because children can articulate the rules doesn’t mean they will follow them. Far from it. Elementary and middle school students are just beginning to learn self-control, effective communication, responsibility, empathy, and the myriad other skills needed to live and learn peacefully with others. To be successful, they need lots of encouragement, support, and practice in applying the rules to a wide variety of classroom situations.

Two key ways for students to practice the rules are modeling and role-playing.

If we expect students to walk when moving around the room, put away the sports equipment, show interest when a classmate is speaking, or settle into their seats quietly when they come to class late, we have to show clearly and directly what these actions look like.

Modeling is a good technique for doing this. It typically includes these steps:

The teacher names the expected behavior and connects it to a classroom rule.

“We said that in our class we would respect people,” Mr. C. says to the second grade class. “One way to show respect is to listen attentively when someone speaks.”

The teacher (or a student) demonstrates the behavior.

Mr. C. has arranged ahead of time for Kesha to help with today’s modeling. Now he says to the class, “Kesha is going to talk about something that will be happening after school tomorrow. I’ll be the listener. Notice what I do.”

Kesha makes an announcement about a dress rehearsal for a school play. Mr. C. listens attentively.

The teacher asks students what actions and expressions they noticed.

“What did I do to show that I was listening to Kesha?” Students respond, “You looked at her,” “You didn’t move around,” “You nodded your head,” and “You smiled when she told about the dog being on stage.”

Mr. C. then asks students to reflect on the impact of his behavior. “How do you think Kesha felt when I showed I was listening to her?”

“It probably felt good to her,” “Like you really cared,” “Like it mattered what she had to say,” students answer.

The teacher asks for students (or additional students) to demonstrate.

Randy volunteers to share. Another student, Ariela, volunteers to be the listener. The class watches Ariela as Randy shares. Afterwards, students tell what they noticed.

The whole class practices the behavior.

“Let’s all practice attentive listening now,” Mr. C. says. “I’ll share something with you and you can all show how you listen.”

After the practice, Mr. C. reflects with the class. “What did we do well? What might we work harder at?”

Mr. C. lets students know that in the days to come he’ll be paying attention to how they practice respectful listening as they go about classroom life.

Role-playing is useful for practicing appropriate behavior in more complex social interactions where students must choose from a wide range of possible behaviors. Good topics for role-playing include sharing materials, including classmates in activities, and supporting someone who makes a mistake. Role-playing allows the teacher to acknowledge the complexity of these situations and give students practice in making responsible choices. Here’s an example:

The teacher brings up a situation, connecting it to classroom rules.

Ms. B. says, “One of our classroom rules says to help each other learn. Let’s talk about what we might do or say to live up to this rule when someone makes a mistake.”

The teacher describes a scenario.

“Here’s a scene,” Ms. B. says. “A teacher is about to read a book about Louis Armstrong, a famous jazz musician. But first she asks, ‘Does anyone know who Louis Armstrong was?’

“A student—we’ll call him Sashi—shoots his hand up. When the teacher calls on him, he says, ‘He was one of the first astronauts to go to the moon.’

“Then another boy—we’ll call him Myles—yells out, ‘No, that’s Neil Armstrong. Louis Armstrong was a great trumpet player!’ Everyone in the class bursts out laughing.”

Ms. B. asks the class, “How do you think Sashi would feel?”

Ms. B. also allows a brief exchange about where Myles might be coming from—maybe he got excited because he doesn’t often know the answer—and why the rest of the class might have burst out laughing.

The teacher starts the action, freezes it before the negative behavior occurs, and asks for suggestions of positive behaviors.

“Let’s act this out,” Ms. B. says. She takes the role of Myles. One student volunteers to be Sashi and another to be the “teacher.”

The acting begins. Just after “Sashi” gives his incorrect answer and before “Myles” yells out the correct one, Ms. B. says, “Freeze!”

With the action poised at this critical juncture, Ms. B. asks students what Myles and the rest of the make-believe class could do to support Sashi.

“Myles could raise his hand and wait to be called before he says anything,” “He could say, ‘I think you might be thinking about Neil Armstrong. Louis Armstrong was a trumpet player’,” and “He could use a calm voice, not yell or make a face,” students suggest.

The actors act out students’ suggestions.

The actors rewind and act out the scene with Myles saying the suggested line calmly.

Ms. B. then asks, “What about the rest of the class? What could they do to be supportive?”

One student suggests that the class should resist laughing even if Sashi himself starts to laugh. The idea is acted out.

The class role-plays the same issue using a different scenario.

If time allows and students continue to be attentive, Ms. B. might have students act out another “mistake” scenario, such as someone misreading a word in front of others or missing a catch in a kickball game.

Be a “practice coach” for learning and for life

Will practicing the rules guarantee that students will live by them? No. There will still be times when children forget or choose not to follow the rules. But when teachers allow students time to think about and practice the rules, students pay more attention to the rules. It sounds simple, but it’s true. Practice is as important to social learning as it is to academic learning. As teachers, one of our greatest services is to be a “practice coach” for learning and for life.

Early in the year, the teacher and students name their hopes and dreams for school that year. The students then come up with rules that will allow everyone to realize their hopes and dreams. The teacher helps students frame these rules in the positive (“Use kind words” instead of “No name calling,” for example) and consolidate all their rules into a short list of three to five easily remembered global rules.

Through modeling, role-playing, and other techniques, the teacher helps students see what the rules look, sound, and feel like in everyday classroom life. The teacher constantly supports the rules with effective reinforcing, reminding, and redirecting language.

One Reply to “Bringing Classroom Rules to Life”

Ch-Ch-Ch-Ch-Changes: Re-establishing Balance in Your Classroom
Public Discipline Systems
I Didn't Do It!
Everyday Rules That Work!
Four-day spring and summer courses are now open for registration!
VIEW SCHEDULE