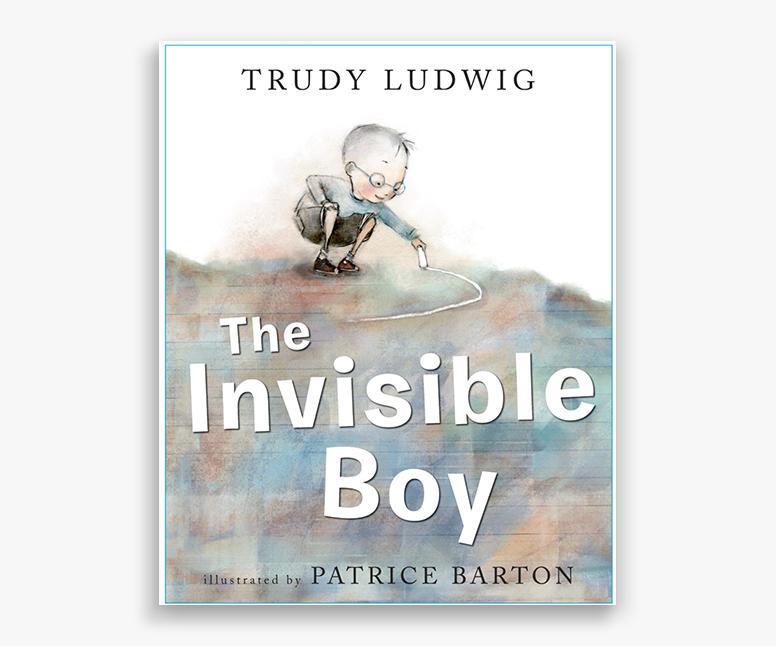 Do you have a child in your class who is invisible to the other children? I’m thinking about the child who is forgotten when children choose work partners, who plays alone at recess, who may sit with others at lunch but isn’t part of the conversation. I sometimes had such students in my elementary school classrooms and I’ll bet some of you have too.

I often wondered how to help the “invisible” child be part of the group. I tried various strategies, some more successful than others. Trudy Ludwig’s new book, The Invisible Boy, can be an invaluable tool for helping your students notice the “invisible” child, see the value in including that quieter child, and even learn some skills for including him or her.

Brian is the “invisible” boy in his classroom. When teams are picked he waits and hopes but is forgotten. He doesn’t get invited to birthday parties. He’s alone.

When a new boy, Justin, joins Brian’s class, the other kids laugh at his Korean lunch. Brian writes Justin a kind note saying that he thought the bulgogi looked good. A friendship between Brian and Justin begins.

Patrice Barton’s illustrations bring this story to life. As the story begins, Brian is a pale and wispy grey, his classmates vibrant and colorful. Brian’s facial expression is both wan and hopeful. His classmates’ expressions aren’t mean, they’re just enthusiastic and absorbed in their friendships, missing Brian altogether. When Justin convinces Emilio to let Brian join their writing group Brian begins to glow. As Brian contributes his creative drawings to the writing, his facial expressions become happy and absorbed.

Trudy Ludwig’s many picture books are based on research about children’s relationships, and this one is no exception. Ms. Ludwig recommends Michael Thompson and Catherine O’Neill Grace’s book Best Friends, Worst Enemies; Understanding the Social Lives of Children, in which they refer to the research of John Coie. When Coie investigated classrooms in the 1970s and 1980s, he found that 10% to 12% of children are alone, forgotten, and unrecognized by their classmates.

Ms. Ludwig also brings a research-supported bully prevention strategy to life in the scene where Brian sends Justin a supportive note after classmates laugh and make mean comments about Justin’s lunch. This matches the findings of the Youth Voice Project: what thousands of children reported “helped most” when they were targeted for meanness were acts of alliance and friendship, often acts that were carried out privately.

I recommend The Invisible Boy as a read-aloud for grades one through three. If you read it to your students, I’d love to hear about how they respond.

Caltha Crowe’s How to Bullyproof Your Classroom includes ten lesson plans that incorporate children’s literature, plus an appendix with more suggestions for books to read with your class.

“. . . like sitting with a smart and practical teacher who knows how to bring out the kindness in people around her.”

Bullying Prevention: How Aware Are You? 5 Steps You Can Take
What to Do When Students Start Testing Limits
It’s Time to Reconnect
Stop Bullying Before It Starts
Four-day spring and summer courses are now open for registration!
VIEW SCHEDULE