“It All Begins With Hopes and Dreams” 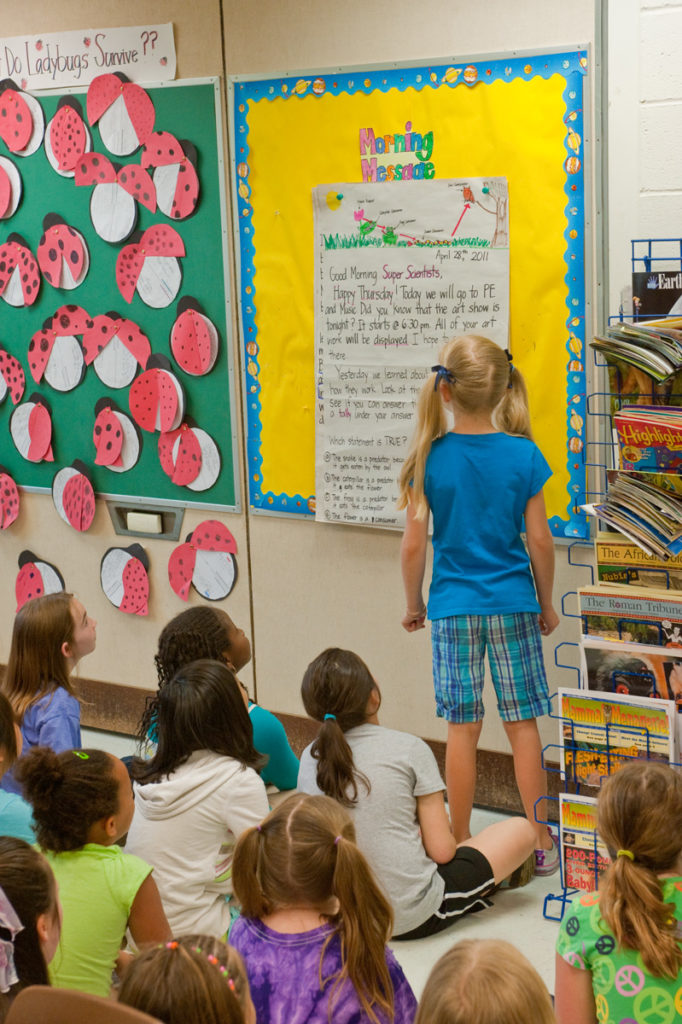 Six months ago, a second grader at Roundtown Elementary, a K–3 school in York, Pennsylvania, brought a simple idea to a whole-school assembly—to place a bench on the playground for students who feel lonely and want someone to play with—and the story went viral.

First, the “buddy bench” idea was featured in a local newspaper. From there, it caught the attention of major media outlets and Facebook users. Now, over 300 schools across the country have brought a buddy bench to their playgrounds.

Principal Matt Miller still receives almost daily inquiries from school leaders across the country seeking answers to these questions: How did you create a school culture that enabled this to happen? What’s the key to your success?

“While the media has focused on the bench itself, this is really a story about empowering students, about creating a culture where students’ ideas are encouraged and celebrated,” says Miller. “At our school, this is a culture that we have deliberately built using the Responsive Classroom approach. What happened here isn’t unusual in our school. It’s about having a culture where student ideas are honored. And it all begins with hopes and dreams.”

Starting the Year With Hopes and Dreams

As at many schools using the Responsive Classroom approach, every school year at Roundtown begins with students naming their most important goal, or “hope and dream,” for the year.

During the first few days of school, this process takes place in all twenty-five classrooms. Teachers ask students to reflect on their school successes and challenges from the prior year and name the things they’re looking forward to accomplishing this year. Next, students select their most important goal for the coming school year and create a classroom display of the class’s “hopes and dreams.”

The hopes and dreams serve not only as a constant reminder of the purpose of school, but also as the basis for creating classroom rules. The teacher asks, “If Olivia wants to learn to read chapter books and Essam wants to learn long division and Lalia wants to make new friends, what rules will we need so that we have a classroom where everyone can work well together and achieve their hopes and dreams?”

Buddy Bench Began as a Hope and Dream

The idea of a buddy bench at Roundtown actually started as the “hope and dream” of a first grader who had visited Germany and seen a buddy bench in action. His hope and dream was for students to have “someone to walk and talk with or play with if they’re feeling sad or lonely.”

Encouraged by his classroom teacher, the student brought the idea to Miller. After much discussion among the principal, staff, and the student about how this would work and what would need to be in place to make it successful, they decided to try it out the following fall. The kick-off began with the now second grade student explaining at an all-school meeting how the buddy bench would work.

“This all started because a child was invited to name his hope and dream for the school year and a teacher helped that child make that hope and dream come true,” reflects Miller. “Sharing hopes and dreams is part of the rule-creation process, but in our community, it’s really so much more than that. It’s about sharing ideas, risk-taking, and pursuing passions. It’s about creating hope and always looking for ways to make ourselves and our school better.”

Hopes and Dreams Are for Adults, Too

It’s not only the students at Roundtown who name their hopes and dreams.

Every year before students arrive, Miller leads staff members as they name their most important hope and dream for the school year. “It’s a way to set a positive tone for the year and build the adult community,” says Miller. “It also serves as a model for what every teacher will do with students, and as with the students, it serves as a springboard for discussing our adult rules.”

Once staff members have articulated and shared their goals, Miller prominently displays their hopes and dreams for the whole community—students, families, and staff—to see. Many families stop to read the bulletin board, lingering especially at the hopes and dreams of their children’s teachers.

Creating a Shared Sense of Purpose

At the end of the first week of school, Miller meets with every class to “receive” their hopes and dreams for the school year. “It sends a powerful message when the principal takes the time to review what every student in the school hopes to accomplish,” says Miller.

Each class brings a chart listing all their hopes and dreams when they meet with Miller in the all-school meeting room. Eventually, twenty-five charts cover the walls, where they remain for the entire year.

After everyone sings a song or reads a story together, Miller reviews the hopes and dreams and chooses a few to highlight. For instance, he might begin, “I see that Sarah wants to learn her numbers to 100 and Devony wants to learn how to use paints. Who else wants to paint and learn more numbers?”

“What all the activities surrounding hopes and dreams are about is creating a shared sense of purpose,” says Miller. “The message is ‘we are here for a reason and we all have important work to do.’ ”

At Roundtown, as at every other school that uses hopes and dreams, this message sets the stage for a positive and productive year of learning, where risk-taking is encouraged and each individual voice matters. This is the kind of school where great ideas are born and aspirations are realized every single year. And it all begins with hopes and dreams.

Matt Miller has been the principal at Roundtown Elementary School in York, Pennsylvania, since 2009. Previously, he served as the assistant principal at Hayshire Elementary School, also in York. He was a second grade teacher for eight years before that. Matt is currently working toward a doctoral degree in education at Immaculata University.

Tags: Getting Started with RC, Hopes and Dreams/Learning Goals

One Reply to ““It All Begins With Hopes and Dreams””

Setting Goals, Hopes, and Dreams: Connecting Students to the Community
Our Hopes and Dreams for School
Hopes and Dreams in a Primary Classroom
The Importance of Setting Purposeful Goals With Students